Who Can File a Paraquat Lawsuit? 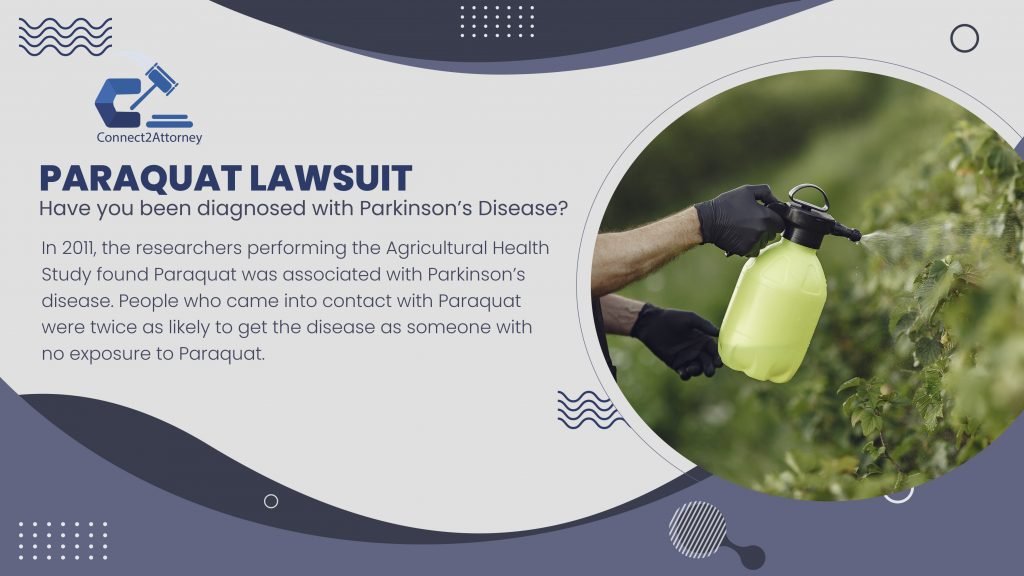 Paraquat dichloride is a highly toxic weed-killing herbicide for commercial use only. Since farmers come in close contact with this herbicide, they’re most vulnerable. Apart from that, people living near industrial farms also suffer from exposure to this toxic herbicide.

Over the years, Paraquat has allegedly resulted in several side effects, with the development of Parkinson’s disease being the most prominent and concerning. As a result, thirty-two countries across the globe have banned the herbicide, including the European Union. However, the U.S. has not banned Paraquat yet.

Paraquat use has increased in recent years. The U.S. Environmental Protection Agency reports Paraquat to be the most widely used weed killer in the country. About 11 million pounds of Paraquat are sprayed on crops in the U.S. annually.

The toxic herbicide kills green plant tissues on contact. Although it’s highly effective, it can be detrimental to human health, especially to people who apply Paraquat to the crops.

Many paraquat settlements filed against the manufacturer have focused on injured plaintiffs with an elevated risk of Parkinson’s disease after exposure to the herbicide. In the United States, paraquat products are the most widely used herbicides.

However, only a handful of agricultural laborers have licenses and sufficient training to work on farmlands sprayed with the toxic herbicide.

As the number of lawsuits grows, we will report on settlements and jury verdicts.

The U.S. agricultural sector has used Paraquat for nearly 50 years. Gramoxone is a famous brand name for Paraquat, marketed by Syngenta. Despite its apparent dangers, the herbicide is still in use in the country.

In 2011, the researchers performing the Agricultural Health Study found Paraquat was associated with Parkinson’s disease. People who came into contact with Paraquat were twice as likely to get the disease as someone with no exposure to Paraquat.

Other research has shown that occupational exposure to Paraquat results in Parkinson’s disease. The Unified Parkinson’s Advocacy Council presented multiple studies and urged the Environmental Protection Agency (EPA) to ban paraquat use in the country in 2017.

They claimed that people who experienced Paraquat exposure in their young lives have a 200% to 600% higher risk of developing Parkinson’s disease.

Is Paraquat Banned in the United States?

While many countries in the world have banned Paraquat, in the United States, the weed killer is still in use on many farmlands sprayed with the deadly weed and grass killer.

There are no federal or state laws that ban consumers from buying or using Paraquat. However, no one can sell the chemical to anyone under 18. In addition, the U.S. Department of Transportation restricts herbicide transport on public roadways because of its toxicity.

In the United States, multiple states have issued a ban on Paraquat for any agricultural purpose. Using Paraquat as an active ingredient against plants and vegetation is illegal.

The states that have banned Paraquat include:

Although Paraquat has been banned in some states, it is still legal in other states. In the states where Paraquat is still legal to use and purchase, federal agencies have restricted its transportation on public roadways due to toxicity concerns.

The paraquat lawyers at Rosenfeld Injury Lawyers represent victims harmed by the toxic chemical, including those diagnosed with Parkinson’s disease.

How Can You Be Exposed to Paraquat?

You can encounter Paraquat hazards in one of the following ways:

Inhalation: Paraquat exposure is dangerous. Inhaling hazardous herbicides can damage the lungs. Inhalation occurs when you breathe in the aerosolized chemical or smoke a plant tainted with Paraquat. Traces of Paraquat have been found in marijuana in the U.S.

Eating or Drinking: The toxic herbicide easily mixes into drinks and foods, making consumption through ingestion or drinking deadly. A strong odor, dye, and vomiting agents are added to Paraquat in the U.S. to minimize the risk of exposure through accidental ingestion.

Effects of Exposure to Paraquat

When exposed to Paraquat, an individual experiences the following immediate side effects:

However, suppose licensed applicators, farmers, and neighbors exposed Paraquat long-term. In that case, the side effects can present themselves in a few hours or days after ingestion or inhalation as follows:

Individuals facing Paraquat’s exposure for months or years are prone to the following health concerns:

What is the Paraquat Settlement?

Were you or a close relative exposed to this highly toxic substance? If so, you can file a paraquat lawsuit against the company to get compensation for lost wages and medical bills. The process is called a paraquat settlement.

For instance, Syngenta is a company that makes hazardous chemicals and is being held liable in many lawsuits.

The Paraquat lawyers hold the company accountable because it:

Marketed and designed the product negligently

Why File a Paraquat Lawsuit?

Were you or a close relative diagnosed with Parkinson’s disease due to Paraquat? Are you suspecting the deadly herbicide may have caused your illness?

The only option to ascertain if you qualify is to request a free case evaluation and file for compensation for your damages.

Some epidemiological studies identified the correlation between paraquat use and Parkinson’s disease. Also, data reveals a five-fold risk of Parkinson’s among those holding occupational positions where workers regularly encounter chemical toxins, including in the farming industry.

Unfortunately, many crop workers and farmers were unaware of the severe health risks of using, handling, or breathing the restricted-use herbicide. As a result, many individuals seek justice and financial compensation through paraquat claims.

Here are some reasons to file a paraquat Parkinson’s lawsuit:

If you have developed Parkinson’s disease due to prolonged exposure to the paraquat dichloride, you’ll be paying hefty medical bills. Plus, a patient with Parkinson’s has to undergo treatment regularly.

According to the CDC (Centers for Disease Control and Prevention), the disease is debilitating. In addition, the patient might lose wages due to taking time off from work or getting fired. Therefore, paraquat lawsuits allow plaintiffs to get financial compensation for pain and suffering, loss of good quality of life, medical costs, and lost wages.